BENDIGO athlete Andy Buchanan marked his first marathon by racing to 15th place in two hours 12 minutes and 23 seconds in Sunday’s running of the Hamburg classic.
The 31-year-old ran the equal 25th fastest time by an Australian athlete for the 42.2km distance.

“I am really happy with 2:12 for my debut, but I know I can improve this by having experienced a marathon race,” Buchanan said.
“It’s an event like no other, so you really learn a lot from each one you do.”

Qualifying standard for this year’s World Athletics Championships in Oregon and Commonwealth Games in Birmingham is 2:11.30.
“I am hoping to be selected for the Commonwealth Games, but they only send a limited number of athletes.”
Team limit is capped at 69.
“I am not sure if I will be selected or not,” he said.
A dual national 10km cross-country champion and strong competitor on the track, Buchanan endured a lengthy wait to contest a marathon as events were cancelled because of Covid.
A planned start in the Melbourne Marathon was derailed because of a stress reaction in his quad.

“Just to be on the start line in Hamburg meant a lot,” said the star from Bendigo University Pride.
“Conditions were windy for most of the course which made it tough, but I had a really good group through to 32km which helped greatly.
“I felt good until the 38km mark. The last two kilometres were really tough, but I didn’t slow down too much which I was really pleased about.”
I am really happy with 2:12 for my debut, but I know I can improve this by having experienced a marathon race.
Andy Buchanan
Buchanan clocked a fastest 5km split of 15.15 and the slowest was 16.00.

“The toughest part was definitely the last few ks. My body was screaming at me to stop and every muscle is aching and you still have to push on. There are a lot of ups and downs in a marathon, emotionally and physically.”

“I was just glad to stop and sit down. I was really proud of my efforts as the marathon journey has been a long one.”

Long-time coach Scott Westcott played a key part in Buchanan’s build-up to Hamburg, as did athletics identity Nic Bideau.
“I was really grateful to get the opportunity to run in Hamburg, but there’s the hunger to try to improve my next marathon time.”

Buchanan has excelled in race distances from as short as 1500m up to 42.2km.
“On the track a 5000m isn’t that different to a 10,000m, but the marathon is really different to a half-marathon.”
Buchanan joins ACT’s Martin Dent at 25th on Australia’s fastest marathon times.
Fastest have been Rob de Castella, 2:07.51 at Boston in 1986; and Steve Moneghetti, 2:08.16 at Berlin in 1990.
Those to have beaten the 2:10 mark are Derek Clayton, Pat Carroll and Lee Troop.
Athletes in front of Buchanan include Liam Adams, Brett Robinson and Jack Rayner.

Two athletes Buchanan knows well, Scott Westscott ran 2:11.36 at Beppu in 2005; and Echuca-based Malcolm Norwood clocked 2:12.10 at Saint Paul, USA in 1991.
For the next week, Buchanan will be holidaying in Germany.
“I will enjoy some sightseeing and relaxing. It’s back to work on Monday,” said the athletics coach for ADP at Bendigo South East Secondary College.

Another goal will be to lead Bendigo Bats as they make the move to Premier Division in Athletics Victoria’s XCR series.
Round one is on May 7 when team relays are run at Jells Park.
“I would really like to race at Jells Park, but all depends on recovery.”
The Bats have home-ground advantage for the May 28 showdown at St Anne’s Winery in Big Hill. 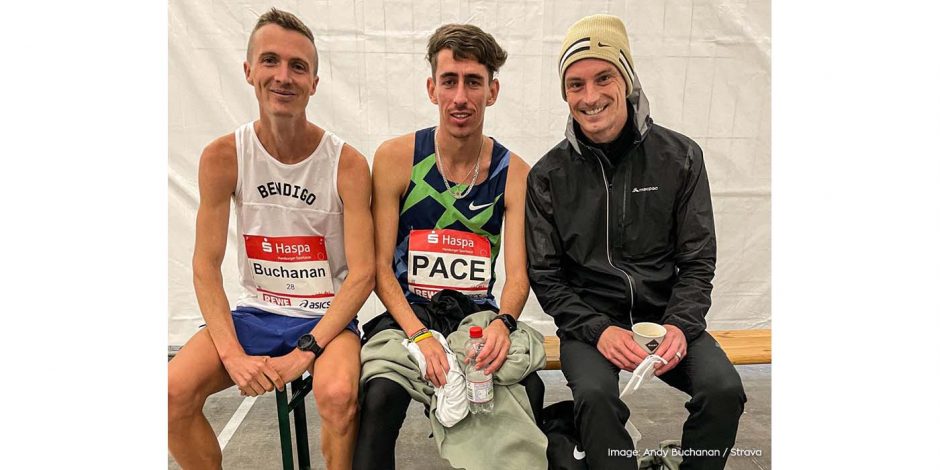