QUALIFICATION for nationals is the target for Cohuna speedster Kye Mason in this Friday night’s start to Athletics Victoria’s track and field championships at Lakeside Stadium.

Mason, 19, faces a tough run as the open 100m and 400m heats are less than an hour apart in the Albert Park precinct.

Now in his third season with Eaglehawk AC, Mason is aiming to race in the under-23 events at the nationals to be run from March 26 to April 3 at Sydney’s Olympic Park.

“Obviously the wind and temperature will play a part in deciding to stick with the 100m and 400m, or just settle on the 400m,” he said of plans discussed with coach Terry Hicks.

Among the career highs was 21.89 in the 200m at last year’s Unisport nationals in Sydney.

“Every race is tough, but the 400m is incredibly tough.

“There’s the lactic build-up, the bend on to the finishing straight, and it’s a test of mental and physical toughness,” Mason said.

Training for all three distances requires a major switch in the intensity levels.

“For the 100 metres a lot is about the start and being explosive from the gun to the finish.

“Sessions for the 400 focus more on longer repetitions, less recovery, and pushing through the lactic build-up.

Mason is confident he has the pace and power to lead or be near it through the opening half of the 400 metres.

“Every race is challenging, but running fast and lowering times make it all worth it.”

“The people I train with are fantastic, not just their workrate, but the social aspect and having fun.”

Mason wore the Aussie singlet at Tuesday’s training and one day aims to be racing in the green and gold.

Away from the track, Mason will soon start second-year psychological science studies at Latrobe University Bendigo, and is a lifeguard at Cohuna Swimming Pool. 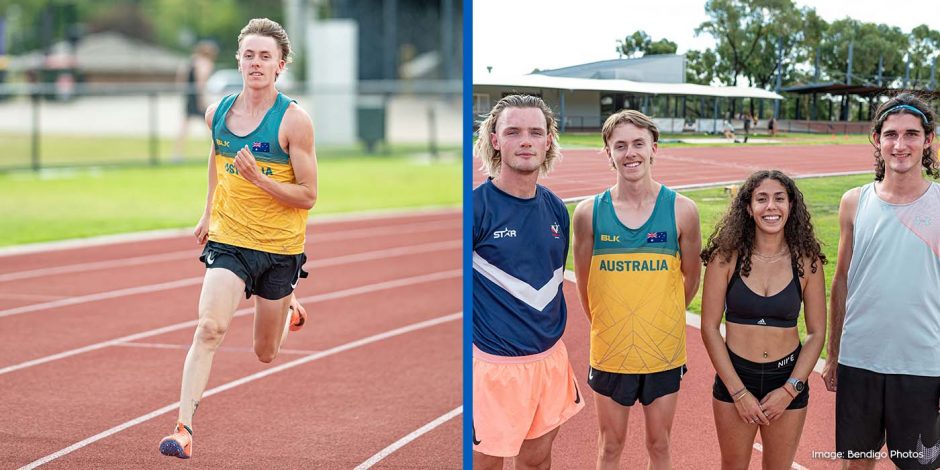