REIGNING champion Andy Buchanan faces a huge task to achieve back-to-back victories in this Friday night’s 5km Frenzy at the Bendigo Regional Athletics Complex in Flora Hill. In the Elite Women’s Race, Commonwealth Games marathoner Sarah Klein is aiming to make her mark. It’s the second running of the Frenzy and a major part of the Harriers’ 100-year celebrations.

The elite men’s 5000m showdown will be run at the Retreat Road venue at 9pm and will complete a big night of athletics planned by the Bendigo Harriers Athletics Club.

The race for little athletes will be followed by three graded heats at the 5000m distance.

“There is a strong chance that the track records set by Andy Buchanan (14:21) and women’s winner Ellie Pashley in last year’s races could be broken.

Although the Bendigo University star has a home-track advantage he will be up against Glenhuntly’s Ben Kelly who was third in the inaugural 5km Frenzy.

“Ben has competed at the world cross-country championships and has a personal best of 14:13,” said Gilligan.

“Harry Smithers has raced internationally and has a PB of 14:38.”

A stress reaction in his thigh hampered Buchanan’s lead-up to the Zatopek 10,000m run on Australia Day at Melbourne’s Lakeside Stadium.

“His run at Zatopek was conservative by his normal standards,” Gilligan said of Buchanan’s time of 30:08.87 to be 10th.

“He is a brilliant runner, but may be underdone, which opens the door for some other athletes.”

Reid marked a time of 30:08.42 to be 13th in the Zatopek 10 duel which was won by Tokyo Olympics marathon runner Jack Rayner ahead of David McNeill and Liam Adams.

A top competitor in marathons, half-marathons and shorter races on the track, Brady Threlfall from Bendigo Harriers marks another return to a track he knows well for the 5km Frenzy.

The Echuca-based athlete and coach are likely to be pacing the “A” race through for the qualifying mark of 14:25 for the national championships.

“Several athletes from Melbourne will be trying to get under that standard,” Gilligan said.

Both are coached by Threlfall and are team-mates with Bendigo Bats in Athletics Victoria’s cross-country series.

The recently-run St Anne’s Vineyards-sponsored Victoria Country track and field championships in Bendigo included a record-breaking run by Stoate in the open 10,000m.

A big season for Reid has included the half-marathon (21.1km) at the Melbourne Marathon Festival in December where he ran a great time of 1:06.38 to be eighth.

The 17-year-old is aiming to break his state’s under-18 record.

The elite women’s race in the first edition of the 5km Frenzy was run by Ellie Pashley as part of her build-up to the marathon (42.2km) at the Tokyo Olympics where she was 23rd.

“A new women’s champion will be crowned this Friday night as Ellie Pashley will not be racing,” Gilligan said.

Possible favourites for the elite women’s 5km include international representative Sarah Klein who raced in the marathon at the Glasgow Commonwealth Games.

Another runner to watch will be Amy Carrig, personal best of 17.25.

Australian trail running representative, Simone Brick, from South Melbourne Athletics Club will be one to watch.

The race will be a great experience for Bendigo University’s Rebecca Wilkinson and South Bendigo rising star Taryn Furletti. 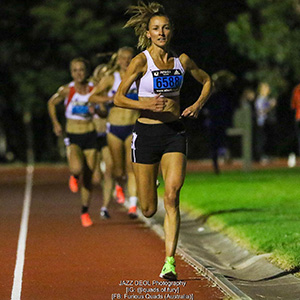 Join in the festivities

Last year’s event was part of the City of Greater Bendigo’s “Summer in the Parks” program. Gilligan said the Harriers decided to have a go at organising the event itself of which he and club president Neil Macdonald have put in many hours to organise.

“Council provided a grant for the extra signage we will have at the event,” said Gilligan.

The night is being aimed at families and for some who may have never been to an athletics meet.

There will be food trucks loaded with hot food, and a sausage sizzle.

Soft drink and water can be bought, and there will be a beer tent.

“Along the front straight there will be an even longer series of marquees, with runners now

“The crowd will be out in lane four.

“It should be an amazing feeling.”

Entry tally across the five graded races in the 5km Frenzy is 87.

Times vary from sub 14 minutes through to mid-20’s for the 5km distance.

Bendigo Region’s four clubs of Bendigo Harriers, Bendigo University, Eaglehawk, and South Bendigo are all represented in the 5km Frenzy.