Our Q&A series continues as we meet up with Greg Hilson – long term athlete, builder, hobby photographer, sponsor of athletics in Bendigo – and a really nice bloke, too. Hear about Greg’s passion for the sport of athletics and the highs and lows he’s experienced since he joined South Bendigo way back in 1984.

Athletics Bendigo: Greg, thanks for your time. Let’s start with some history. How many years have you been running, jumping and throwing for?

Greg Hilson: I started running with the South Bendigo Athletics Club from the start of the 1984 Cross Country season when I was aged 14 (you do the maths!), but I had run four ‘Eaglehawk to Bendigo’ races & an Eaglehawk Half Marathon prior to that!

AB: Wow. That’s a long time! Why do you run, jump and throw?

Greg: I just love trying to run faster, jump bigger or throw further than I ever have before, however, these days it’s just trying to turn the clock back!

Athletics Bendigo: Over that time are there any Personal Best’s you’re particularly proud of?

Athletics Bendigo: Do you have a favourite pair of shoes?

Greg: Anything Asics, but I am loving my Saucony High Jump spikes at the moment!

Greg on his Memorable Performances 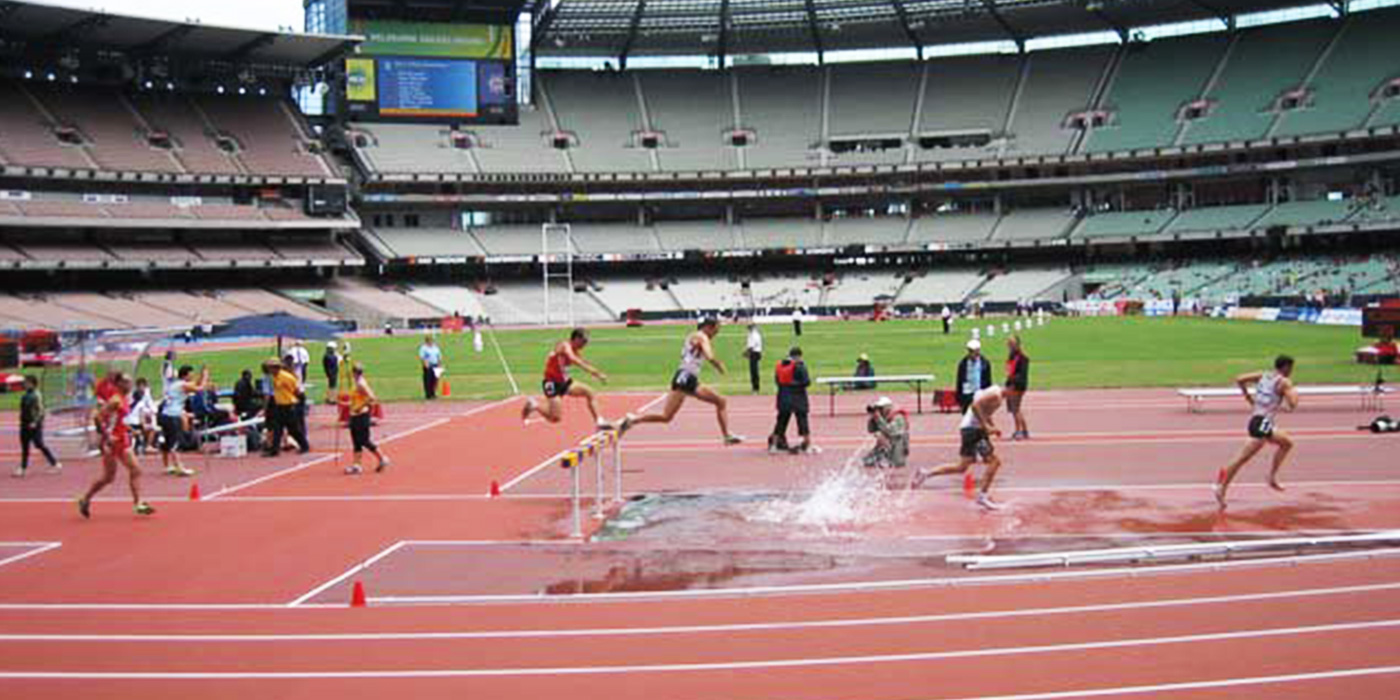 ABOVE: Greg in action at the MCG in the Steeplechase in 2006.

Athletics Bendigo: you’ve had some pretty amazing experiences, what have been some of best running / athletics experiences?

Greg: I had the awesome opportunity to run an 800 metres at Stadium Australia prior to the Sydney 2000 Olympic Games. This was with the South Bendigo men competing in the Athletics Australia Summer Cup Final. I also had a chance to somewhat ‘repeat the feat’ and run a 3000 metre Steeplechase on the Melbourne Cricket Ground prior to the Melbourne 2006 Commonwealth Games. (pictured above)

On a more local level: 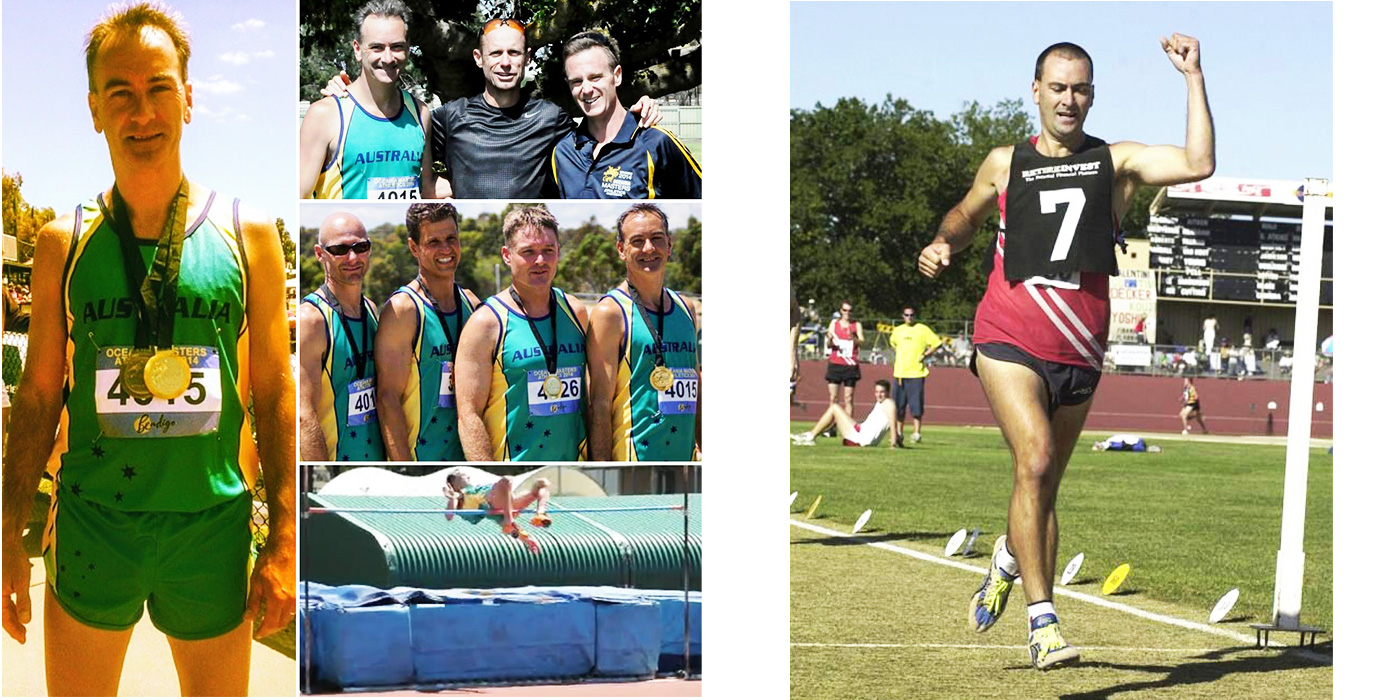 Athletics Bendigo: They are some awesome highlights, but what have been your worst running experiences?

The first one was at the 2015 Ringwood Gift meet at Proclamation Park and I’d won my heat of the Masters 300 m. Just over an hour later, I was running off the back mark in the red vest and my hamstring snapped like a whip cracking after just 20 metres into the final! My season was over!

The second was in 2018. I came down unwell prior to the Athletics Victoria Sandown Road Relays (pictured below), but we couldn’t find a replacement runner.

So, instead of travelling by the bus, I kept my distance and drove to Sandown by myself. I actually ran alright – somewhere around 24 minutes for the 6.2km and might have even been fastest in my team – but I shivered all the way home & spent the entire next week in bed with the flu! 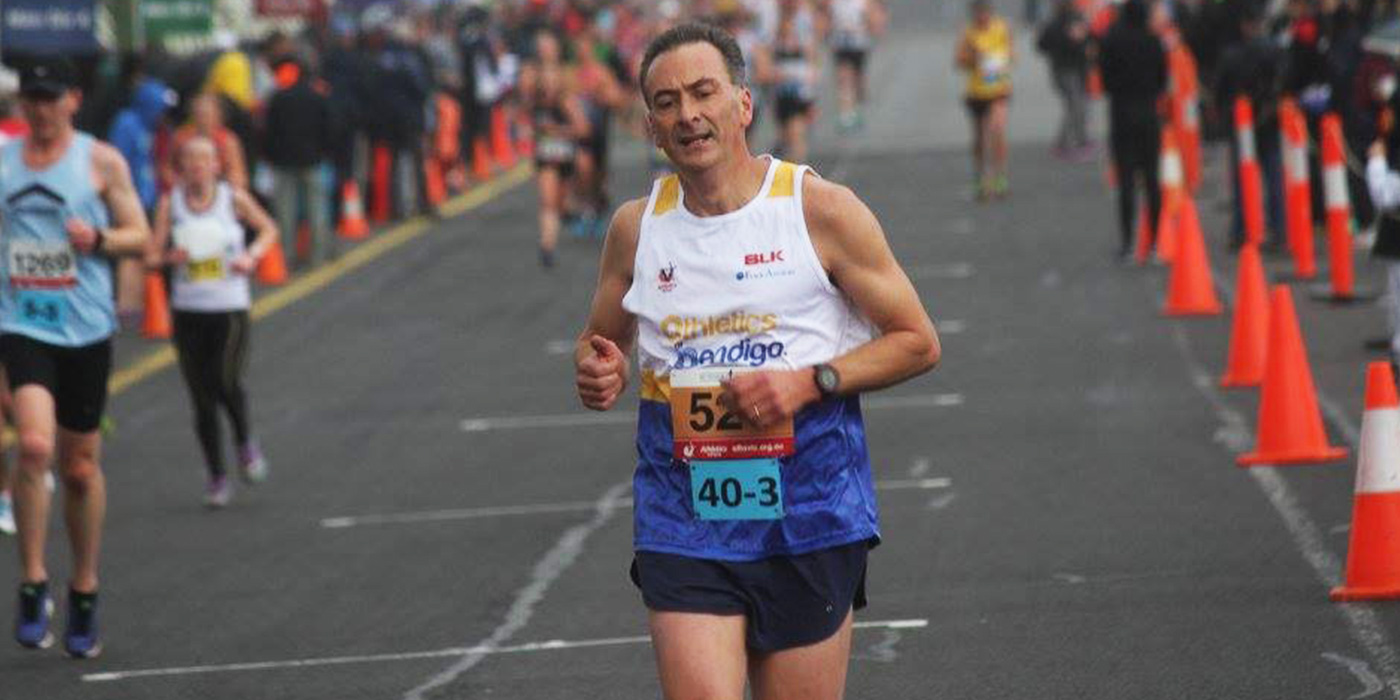 Athletics Bendigo: Your favourite event to compete in?

Greg: My favourite track event would have to be the 800 metres, whilst in the Field definitely the High Jump.

As for the Winter Season, nothing could beat the old Eaglehawk to Bendigo & I may have ran more the course more than 60 times as I would run the Fun Run, Keith Huddle & the Professional Bendigo Athletic Club races each year!

My first Eaglehawk to Bendigo was when I was aged 11, and it was called the 1980 Golden Fleece Fun Run and covered 9km. The course did a loop around Lake Neanger before heading into Bendigo/Then my first Keith Huddle Memorial was in 1984 & my first pro race on our course was in about 1995. 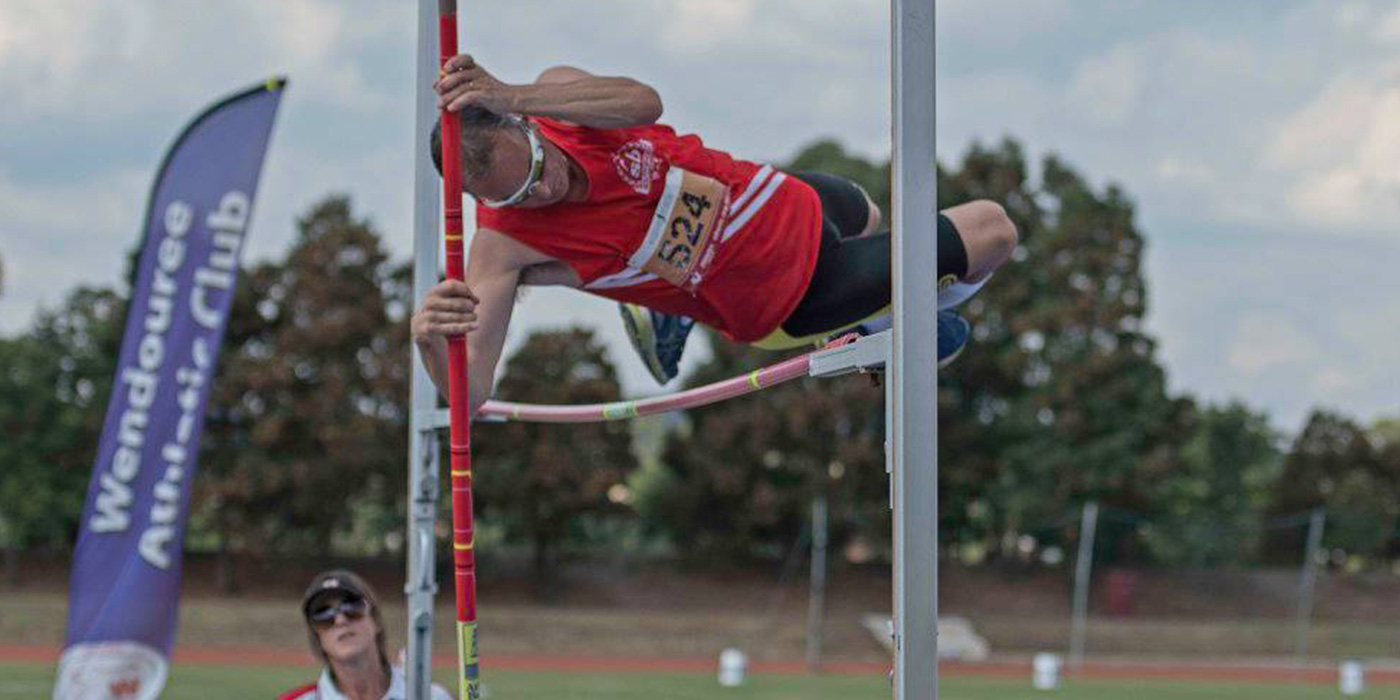 If we could call the Victorian Country Championships an ‘event’, then this is the one I look forward to the most each year.

My first Athletics Victoria Country Championships was in Ballarat in 1986, winning a silver medal in the Under 18 Pole Vault, and haven’t missed one since! This year’s Championships in Geelong was my 35th in a row!

Athletics Bendigo: Do you have any hobbies outside of athletics?

Greg on Athletics in Bendigo

Athletics Bendigo: Why do you support athletics in Bendigo?

“Athletics is a sport for everyone, all ages, all abilities & the only real sport that can be fully for all the family! It’s possible to have 3 generations of family competing in the one race and no clubs or region does it better than our clubs in Bendigo!”

Athletics Bendigo: What’s one thing that you think would improve athletics in Bendigo?

But I think that keeping it affordable for all people is our biggest challenge. On one hand, there are fees and costs that are going up each year, but we have to balance those costs with the free parkruns that people can choose to do, too.

Hilson Builders can build your dream home, extension, renovation or small commercial project. They are HIA registered builders who have been working, living (and running!) in the Bendigo region for over 20 years. Greg and his wife, Gina, have an exceptional portfolio of happy clients and take great pride in finishing jobs on time and on budget.

Get in touch with Greg and the team at Hilson Builders: