A rising star at Bendigo University Athletics Club, Matt Buckell claimed bronze in Athletics Victoria’s under-20 5000m championship run on 11 February 2021 at the Box Hill track. Racing as a top-age competitor, Buckell’s aggressive approach was a key factor in achieving a top-three placing.

“The plan was to try and open up a gap and have the rest of the field think they would be racing for second,” said Buckell.

“I made a great start, but probably went a bit too fast in the opening two kilometres.

“It was a tough night for racing,” he said of the windy conditions at the Elgar Road complex.

“I just didn’t have enough energy in the last few laps.”

The runner from Uni Pride had raced a couple of state meets and believed Thursday’s race was an ideal chance to claim a medal.

“I was well-prepared. I had done a lot more training and more consistency in training,” Buckell said of running alongside or following programs written by coach Andy Buchanan.

“He is a great coach,” Buckell said.

“I have been with Andy since year 7 and am always learning and working as hard as I can to improve.”

A lot of this season’s improvement can be attributed to the 5km Frenzy hosted by Bendigo Harriers at the Flora Hill track in mid-January.

“I was up against much older and stronger runners and learnt a lot,” said the year 12 student at Bendigo Senior Secondary College.

Buckell’s early days in running were with Bendigo Harriers.

“Dad (John) was racing cross-country so I would tag along and usually have a go in a 500 metre race.”

These days it’s Matt and twin, Ned who are racing on the track and cross-country.

They have plenty of support from parents John and Kelly.

Next major race for Matt will be the Box Hill Burn on March 2. 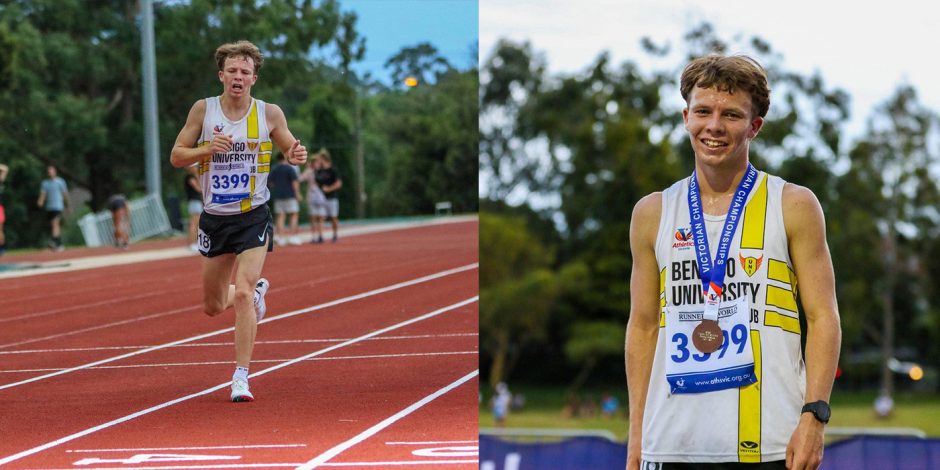 “It’s been really pleasing to see Matt’s development over the past few years,” Buchanan said.

“A lot of juniors either burn out or lose interest when they turn 18.

“However, Matt has taken his running to the next level.

“He is a great kid, and hopefully in a few years can be re-writing the Athletics Bendigo open-age record books.

“Matt had a race plan to attack hard two or three kilometres into the race.

“In tough conditions he followed his race plan and ended up doing a lot of leading.

“He stuck to his plan and was rewarded with a bronze state medal.”

Another goal for Buckell will be to qualify for this winter’s national cross-country championships.

Eaglehawk’s Juliet Heahleah clocked 23:39.7 to be eighth in the B-grade race.