Racing in the Bendigo University Athletics Club colours, Griffin charged to victory in a time of 22.19 minutes.

The women’s open champion was the consistent Alice Wilkinson from Bendigo Harriers in 26.34 to be 10th overall. 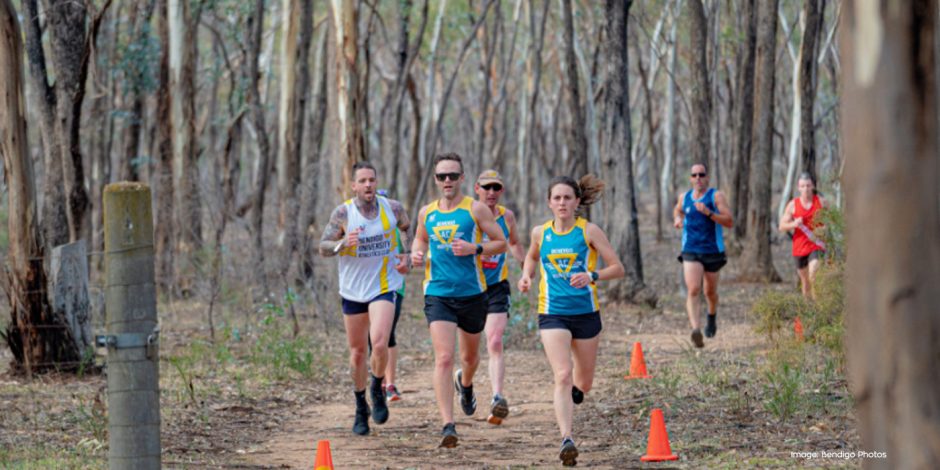 How the day unfolded

There were 152 competitors across the three race distances of the Champions Supa IGA-backed Woodvale Classic which was also sponsored by G.M. and G.L. Hilson Builders, and Intersport Bicknell’s.

Griffin was up against 54 rivals as they raced two laps of the course.

The race for the women’s open crown was keenly-fought.

Wilkinson was number one in 26.34 from Harriers’ clubmate Abby Kuhne in 26.49 as University’s Rhianna Wik-Gamble was a second away in third place.

It was another brilliant hit-out by Wilkie as she was 50-plus women’s champion in 27.24 and 15th athlete to finish.

A top runner on all surfaces, Anne Buckley from Bendigo Harriers was second in the women’s 50-plus in 28.29 from University’s Lisa Wilkinson, 30.54.

ABOVE: Logan Tickell leads the field in the 3200m event. (Photo by Bendigo Photos)

A memorable afternoon for the Tickell family

A memorable afternoon for the Tickell family included wins by Logan, and younger sister Chelsea in the 3200m.

Racing in the South Bendigo colours, Logan took overall honours  and the under-15 boys title in 10.25 as Chelsea charged to the finish in 12.55 to be under-15 girls champion and 10th overall.

Runner-up in the under-15 boys 3200m was Merlin Tzaros from Bendigo Harriers in 10.55 as South Bendigo’s Thomas McArthur was next ini 12.15.

South Bendigo’s Caitlin Campbell was fastest of the under-18 girls in 14.08.